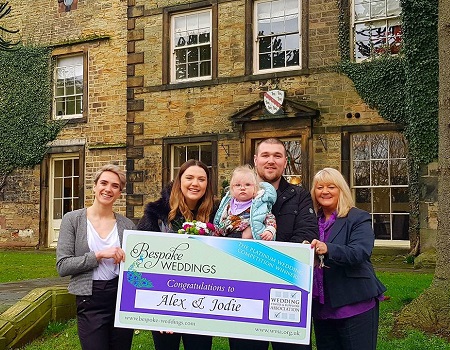 Alex & Jodie won the wedding of their dreams through the Bespoke Competition at Mosborough Hall, their prize included Venue Hire, and a Food & Drinks Package!

After being selected to win the Venue Hire at Mosborough as part of Round One of the Bespoke Competition Alex & Jodie were required to write a story of their background for the chance to win further prizes!

We received the unfortunate news after 5 years

This was when we decided to embark on the journey of IVF.

It was a long process and Alex supported me all the way.

with the conception of our miracle Hettie.

With a history dating back to the 12th century, the Best Western Plus Mosborough Hall Hotel offers quality hotel rooms in Sheffield – most contemporary in style, and one complete with a four poster bed.

For your chance to WIN the wedding of your dreams like Alex & Jodie did, click on the link above to enter our latest Bespoke Win a Wedding Competitions.