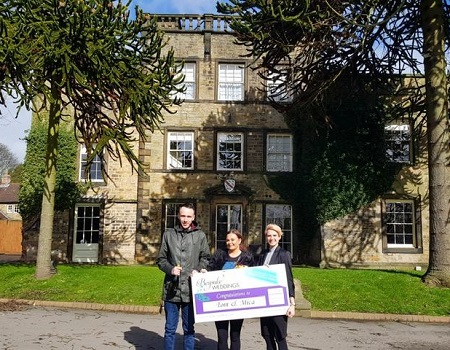 Tom & Mica were selected as the Bespoke Competition Winners at Mosborough Hall, their prize included Venue Hire, and a Food & Drinks Package!

After being selected to win the Venue Hire at Mosborough Hall as part of Round One of the Bespoke Competition Tom & Mica were required to write a story of their background for the chance to win further prizes!

‘One mutual friend, 3 battles against cancer, a house and a puppy and now it’s our time for our happily ever after. Tom and I met back in 2011 through a mutual friend but only 2 weeks into the relationship cancer struck for my second time and gave us our first battle as a couple.Through the tears, laughter and fear we pushed on stronger than ever. Several years on a house and a beautiful puppy later we have now decided to tie the knot.’

Upon finding out they had won Round Two of the Competition, Mica said;

‘Myself and Tom couldn’t believe our luck when we won the first part of the competition.
Luck has never been on our side so when we had a phone call from Laura we were so nervous to answer, with such surprise Laura had rung to tell us we’d won round 2 of the competition. we were over the moon! We couldn’t believe it and its taken ages for it to set in that our dream wedding is happening! It was becoming a reality. we’d like to thank bespoke weddings for everything they’ve done for us and another massive thank you to Laura who had been amazing! And we couldn’t wish for anyone better to help us !‘

With a history dating back to the 12th century, the Best Western Plus Mosborough Hall Hotel offers quality hotel rooms in Sheffield – most contemporary in style, and one complete with a four-poster bed.

For your chance to WIN the wedding of your dreams like Tom & Mica did, click on the link above to enter our latest Bespoke Win a Wedding Competitions.