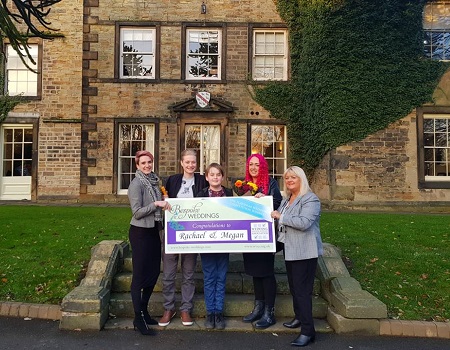 After being selected to win the Venue Hire at Mosborough as part of Round One of the Bespoke Competition Rachael & Megan were required to write a story of their background for the chance to win further prizes!

Fast forward to August 2018 while out enjoying a family picnic with our son Callum,

Megan got down on one knee and popped the question.

Now looking forward to our future together as best friends and soul mates.

Upon finding out they had won Round Two of the Competition, Rachael and Megan said ‘We’re absolutely over the moon and still can’t believe we have won round two food and drinks package for our wedding.
A huge thank you to Laura our wedding planner and everyone at bespoke for everything. Roll on planning our big day now 2020!‘

With a history dating back to the 12th century, the Best Western Plus Mosborough Hall Hotel offers quality hotel rooms in Sheffield – most contemporary in style, and one complete with a four poster bed.

For your chance to WIN the wedding of your dreams like Rachael & Megan did, click on the link above to enter our latest Bespoke Win a Wedding Competitions.